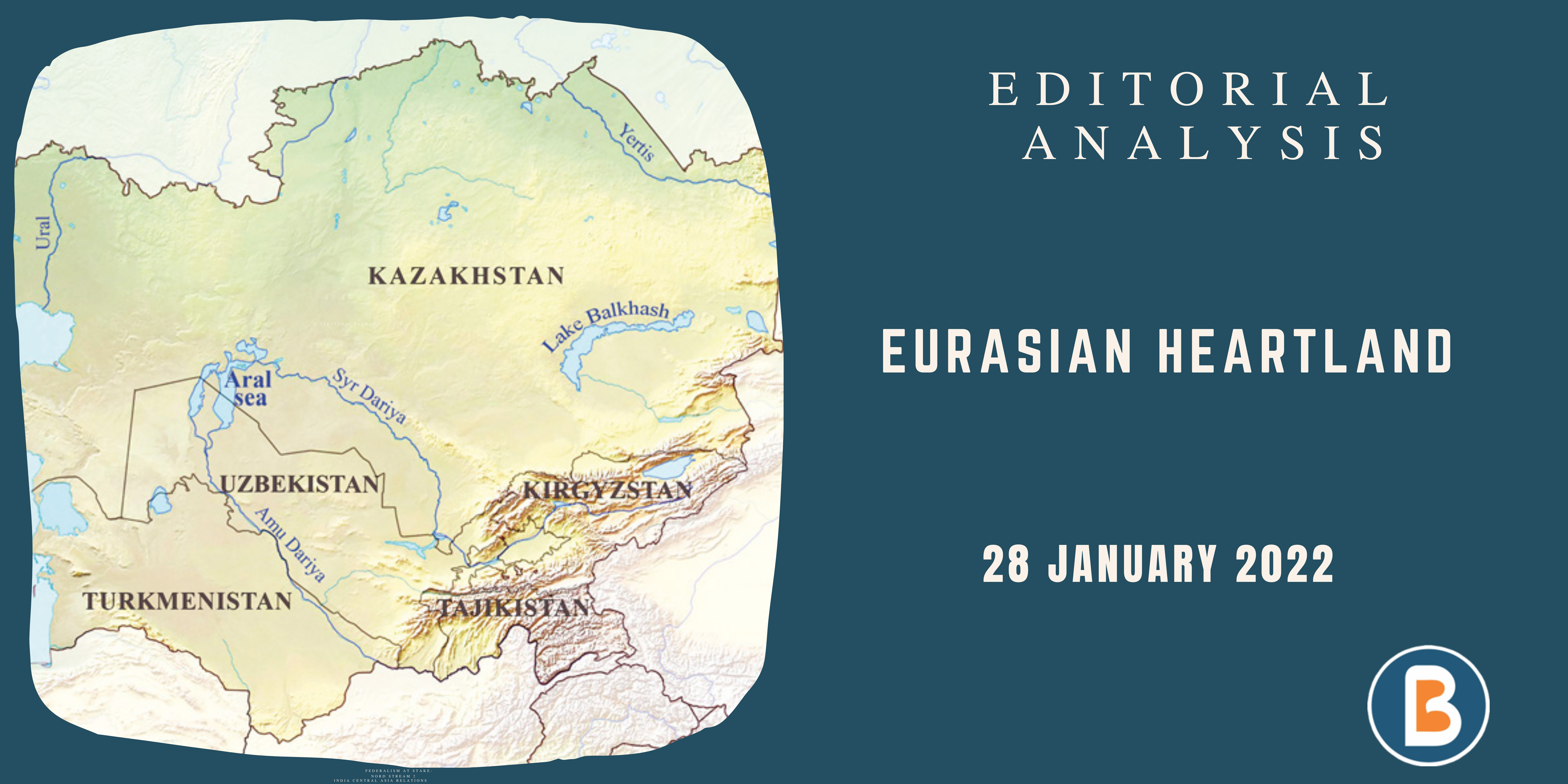 • The salience of Central Asia lies in its geostrategic location comprising the Eurasian Heartland.
• Crucially, it provides a ringside view of developments taking place in the countries that it flanks, namely, Russia, China, Afghanistan, Iran and Pakistan.
• Today, a new geopolitical contestation appears to be underway in Eurasia.
• This is reflected in shifting great power rivalries and new strategic equations and alignments.
• A key driving force behind this transition is the Russia–West confrontation, with the latter seemingly seeking to contain the Kremlin in its immediate neighbourhood.
• This has led Moscow to reinvent itself in the region.
• Its “Greater Eurasia” project inherently seeks to preserve its “sphere of influence”.
• However, Russia has been forced to accommodate China in its “near abroad” as a quid pro quo for relying on Beijing to withstand the Western geopolitical pressure.
• Pertinently, this Russian concession could facilitate China’s rise as a Eurasian powerhouse, potentially altering the regional balance of power.
• Interestingly, Russia’s latent competition with China runs parallel to their bilateral cooperation against a common adversary.
• The two countries have closed ranks to insulate the region from the United States (US), given their shared mistrust of Western manoeuvrings in the region.

Why this matters to India?

• Overlapping interests in the economic, energy, health, connectivity, security and defence realms appear to drive India’s engagement with the CARs.
• India’s benign and friendly image anchored in civilisational linkages with the region, its achievements in nation building, and positive economic outlook in an era of slowing global growth are viewed favourably by the Central Asian regimes.
• In this context, the regional connectivity initiatives that India has sought to promote through the International North-South Transport Corridor (INSTC) and Ashgabat Agreement potentially provide the landlocked Eurasian countries an option beyond the Belt and Road Initiative (BRI).
• CARs inherently remain suspicious of China’s “infrastructure imperialism” that has cast a shadow on their local economies.
• In contrast, India has insisted that connectivity projects imbibe inclusivity, respect for sovereignty and territorial integrity, and fiscal prudence
• CARs also remain key pillars of India’s engagement with the Shanghai Cooperation Organisation (SCO).
• This pan-Eurasian organisation has gained traction in the last few years. This includes exploring a regional consensus on issues of security, economic cooperation and connectivity.
• Meanwhile, the support of CARs in this multilateral grouping could be pivotal to tackle the anti-India advocacy promoted by China–Pakistan tandem in Eurasia.

• Sustaining the ongoing momentum and not reverting to the episodic engagement of the past would be crucial.
• An Act North Eurasian Policy is perhaps more relevant than ever before.