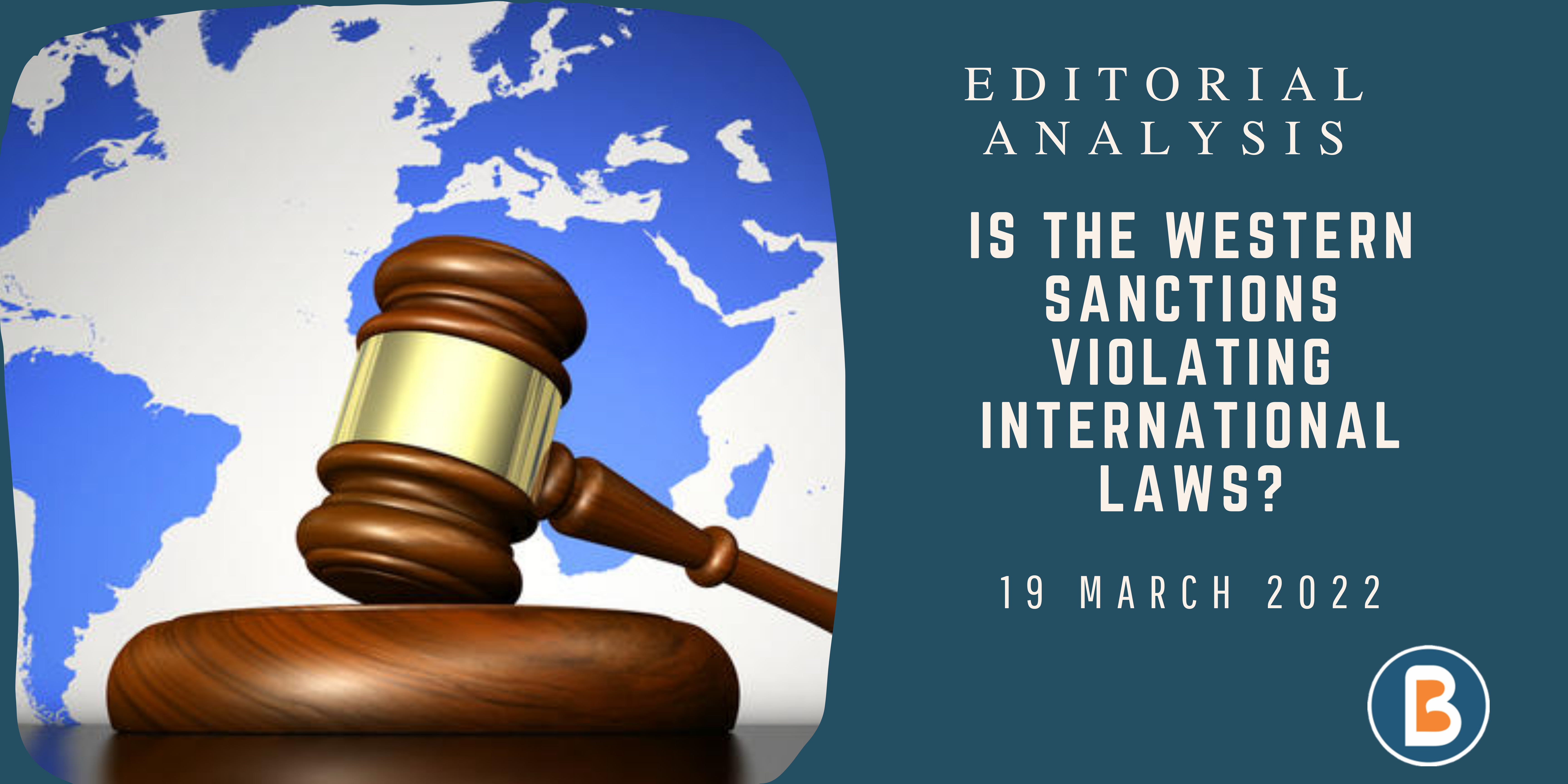 • Amidst the sanctions imposed by the Western Countries against Russia, questions have arisen regarding the violation of other international laws governed y Multilateral Organizations.

• Canada and the European Union (EU) are use all possible tools to impose punishing economic sanctions against Russia. Trade restrictions are a crucial arrow in the sanctions quiver.
• For example, Canada has suspended the most favoured country (MFN) treatment that it owes Russia under the rules of the World Trade Organization (WTO), which is the worldwide organisation that polices international law on multilateral trade. Similarly, the EU and the US are considering similar actions.
• In a related development, the United States and the European Union have formally notified the World Trade Organization’s General Council that Russia’s participation in the “Developed Countries Coordinating Group” (i.e., an informal WTO group) has been suspended due to its “egregious violation of international law, [the] UN Charter, and other WTO rules.”

• There are provisions in the WTO regulations that allow countries to impose sanctions. Article 21 of the General Agreement on Tariffs and Trade states as much.
•
• • It allows a member country to take actions “which it thinks” necessary to protect its vital security interests (ESI) in the event of “war” or another “emergency in international relations.”
•
• • Though the terms “which it considers” offer the country broad freedom in determining the necessity of the measure adopted to protect its ESI, Article XXI is not totally self-judging.
•
• • When a country is accused of breaking its WTO duties, it might use Article XXI as a defence.
•
• As a result, Canada can justify deviating from the MFN requirement by establishing that it is safeguarding its ESI due to national security concerns. Thus, Canada can justify deviating from the MFN rule by demonstrating that it is protecting its ESI due to an ongoing war or emergency in international relations.
• However, Article XXI cannot be employed to judge whether Russia has breached international law on peace and security.

• If Russia challenges the Canadian suspension of MFN before the WTO’s Dispute Settlement Body (DSB), Canada will have to show that its actions are backed by Article XXI.
• Canada’s argument that it is doing so because Russia does not respect the rule-based order will have no basis in the WTO law.
• Even if it is judicially established that the Russian invasion of Ukraine is a breach of international law, that alone will not be sufficient to impose trade sanctions against Russia as per the WTO law unless countries make a clear case under Article XXI.
• The Russia-Ukraine war undoubtedly constitutes an international armed conflict, as attested by the recent United Nations General Assembly Resolution.
• Furthermore, violation of Ukraine’s territorial integrity is a threat to the ESI of several countries. Thus, countries can use the legal cover of Article XXI for trade sanctions.