Takeaways for India From the WTO Ministerial Conference 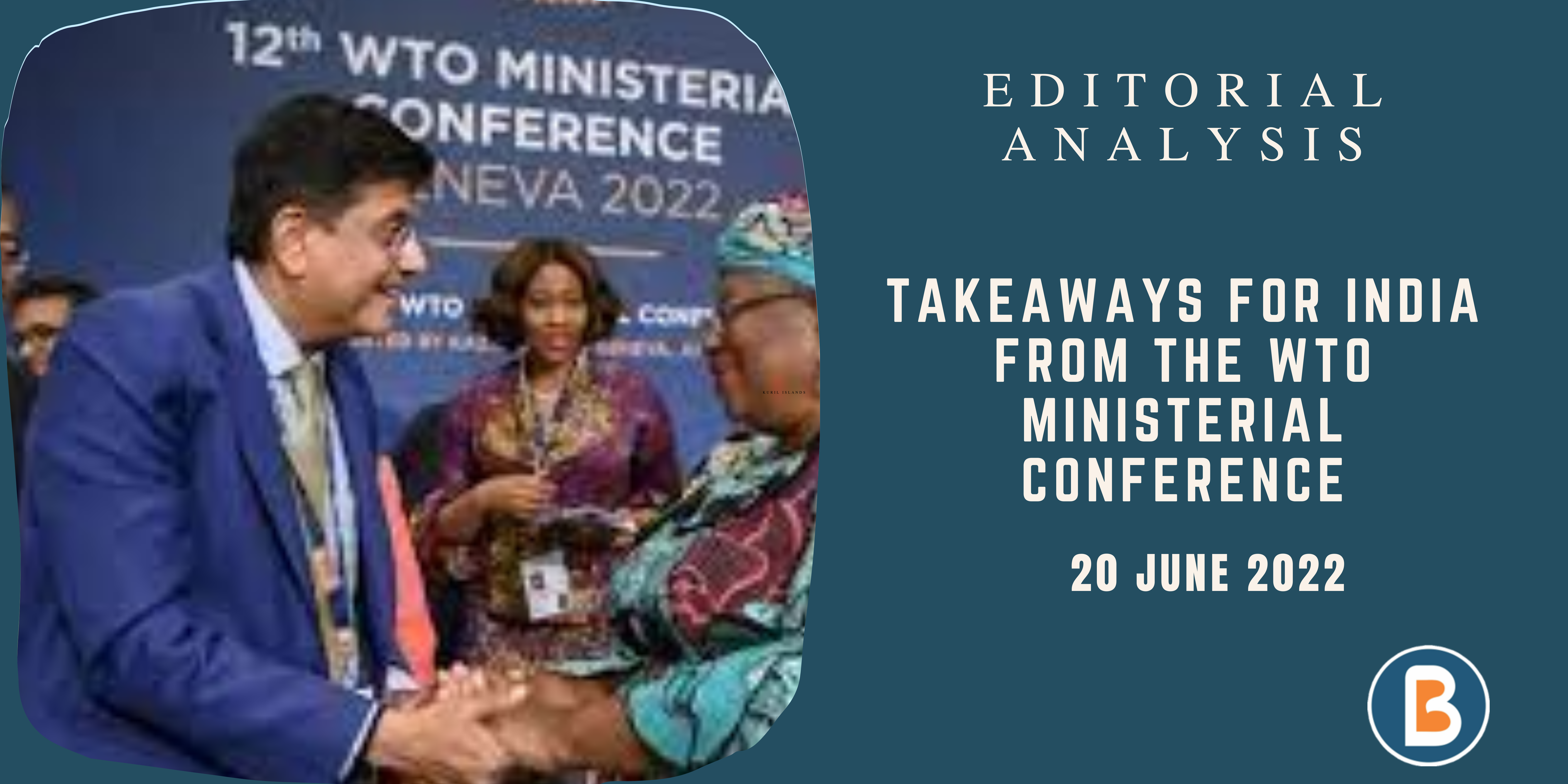 Takeaways for India From the WTO Ministerial Conference

• Recently, member countries of the WTO wrapped up the Ministerial Conference’s twelfth outing (MC12) securing agreements on relaxing patent regulations to achieve global vaccine equity; ensuring food security, according subsidies to the fisheries sector and continuing moratoriums relevant to e-commerce, among others.
• Together they constitute the “Geneva Package.”

• The Ministerial Conference of the WTO is the highest decision-making body.
• The Ministerial Conference meets at least one in every two years which decides upon various agreements.
• Unlike other organisations, such as the International Monetary Fund or World Bank, WTO does not delegate power to a board of directors or an organisational chief.
• All decisions at the WTO are made collectively and through consensus among member countries at varied councils and committees.

Emphasis on the Agri Sector:

• India had previously declared that, despite its standing as a major donor to the World Food Programme (WFP), it has never imposed export limits for WFP procurement.
• It argued that a blanket exception would stifle its efforts to ensure food security at home.
• It would have to maintain its WFP promises regardless of its internal requirements in such a case.
• Negotiators agreed that member nations would not impose export bans or restrictions on goods acquired by the World Food Programme for humanitarian purposes.
• The decision, however, will not bar member countries from enacting domestic food security measures.
• Negotiators were unable to establish an agreement on a reasonable public stockholding threshold for domestic food security, domestic agricultural support, cotton, and market access.

• India successfully managed to carve out an agreement on eliminating subsidies to those engaged in illegal, unreported and unregulated fishing.
• The only exception for continuing subsidies for overfished stock is when they are deemed essential to rebuild them to a biologically sustainable level.
• Overfishing refers to exploiting fishes at a pace faster than they could replenish themselves — currently standing at 34% as per the UN Food and Agriculture Organization (FAO).
• Declining fish stocks threaten to worsen poverty and endanger communities that rely on aquatic creatures for their livelihood and food security.

• Member countries decided to prolong the present moratorium on customs taxes on electronic transmission (ET) until MC13, which is scheduled for December 2023.
• 105 countries, including the United States, the United Kingdom, Australia, China, and Japan, had requested an extension of the ban, with India and South Africa opposing it.
• Extending duty-free market access due to the moratorium resulted in a global loss of $10 billion per year, with developing nations bearing 95 percent of the cost.
• They were also looking for clarification on what constitutes electronic transmission.