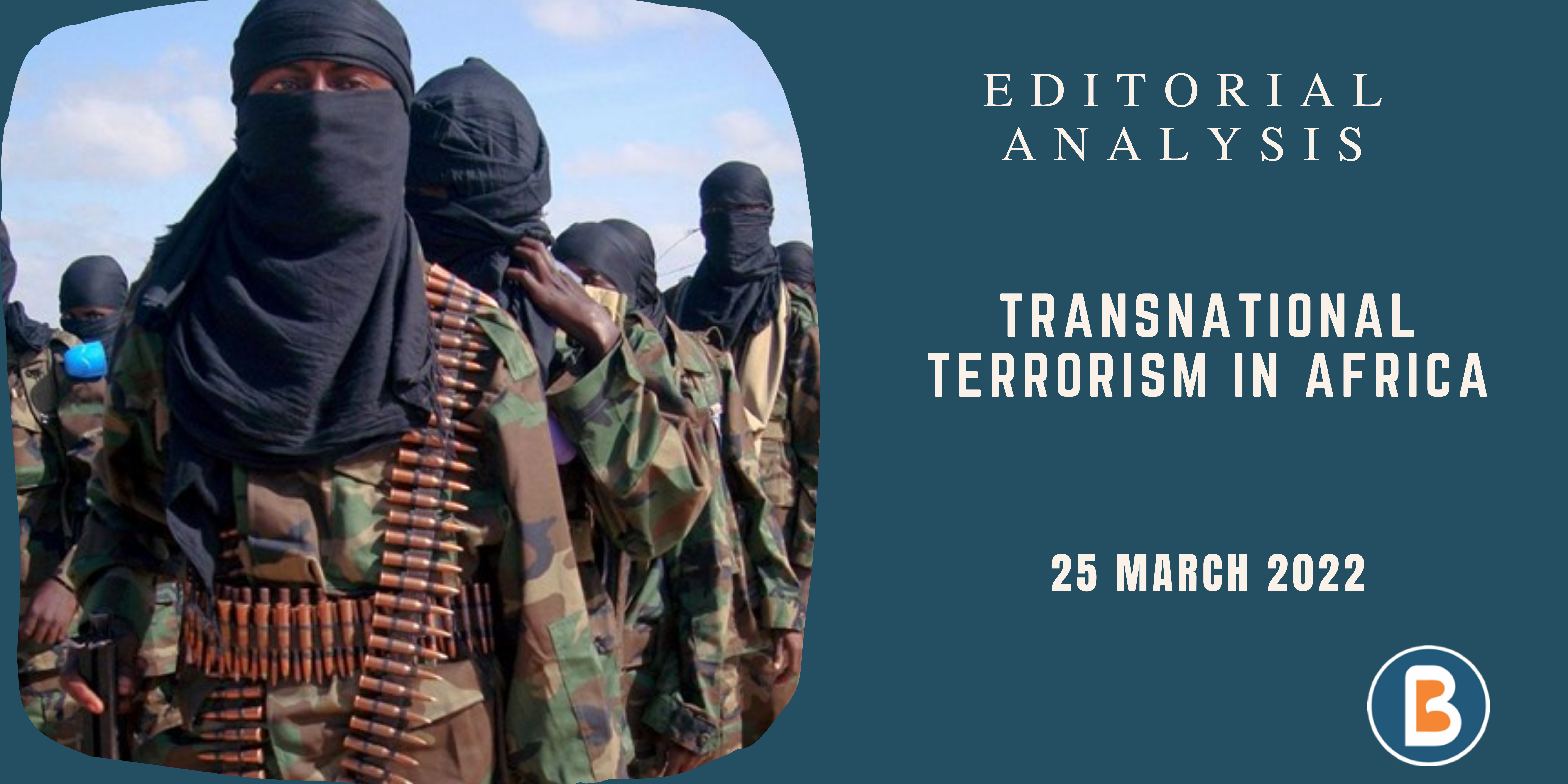 • The terrorist threat today is fundamentally different from what the world faced on 9/11. Terrorism today is increasingly transnational, geographically dispersed and ideologically diverse.
• Terrorist activities have been spreading from West Asia to Central African countries and now to Greater Saharan region.
• Salafi-Jihadi Groups such as Boko Haram in Nigeria and Al-Shabaab in Somalia, which are loosely affiliated with Al-Qaeda and now Islamic State, have been harbouring violence, posing threat to human security, and political stability in vast regions of Africa

What is Transnational Terrorism?

• These organisations have a regional as well as global reach and are overtly autonomous.
• Transnational terrorism is a unique subset of terrorism with a distinct profile, the members of such organization have several unique characteristics with operational capabilities in multiple countries involving a variety of ethnic, and national backgrounds

• It is an active-armed and politicised group, which operates within the Horn of Africa (Djibouti, Ethiopia, Kenya, and Somalia). Al-Shabaab is considered to be an ally or affiliate of Al-Qaeda
• An offshoot of Somalia’s Islamic Court Union (ICU), it evolved from a clan community driven Islamic Jihad Movement inspired by Somali Islamic scholars and spiritual leaders trained in Saudi Arabia as Wahhabi sect followers
• It was established during the Somali Civil War which began with the overthrow of the former Somali President Siad Barre in 1991.
• Al-Shabaab operates with multiple cells which are generally decentralised with no specific written or declared agenda other than creating and imposing strict Wahhabi doctrine in Somalia, and with the express aim of expanding it to the rest of Horn of Africa, and eventually into various corners of Africa.

• It was founded by Mohammed Yusuf, a Wahhabi sect follower,
• This took a violent turn in 2009, when a dispute erupted between Nigerian authorities and BH members leading to the storming of BH complex. The raid reportedly killed 700 people including the BH founder Md. Yusuf.
• Following the incident, in the same year, BH or JAS pledged its allegiance to Al-Qaeda of Iraq (AQI)
• Notably, a sharp increase of Boko Haram targeting Muslim communities along with other local Nigerian ethnicities, resulted in a split in 2011, with the creation of Islamic State of West Africa Province (ISWAP) in Nigeria.
• The region surrounding Chad Lake has been taken over by both the groups.
• The region around Lake Chad, which encompasses vast territory of four countries—Nigeria, Cameroon, Chad, and Niger—has been a bone of contention among them.