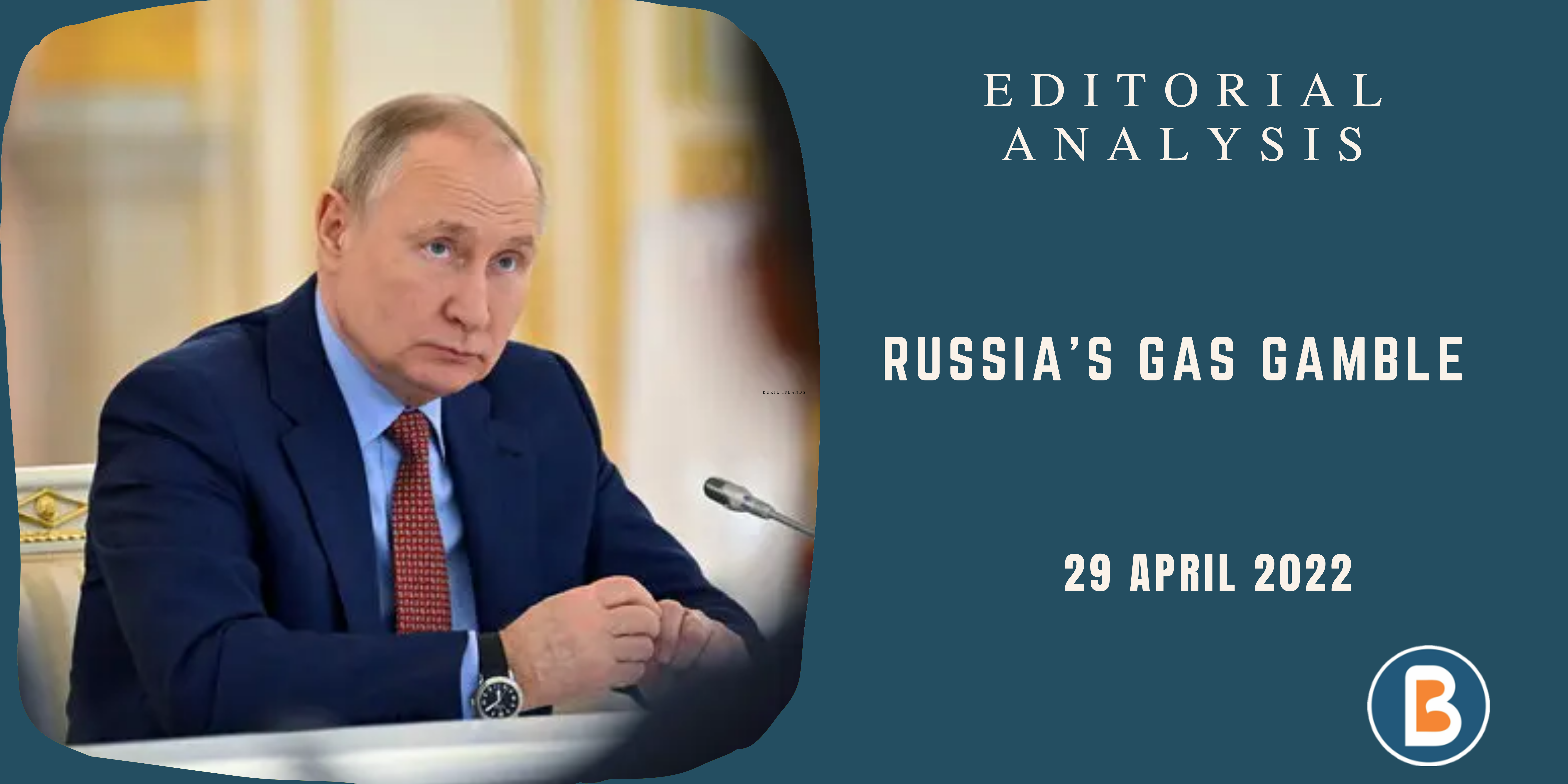 • Russian energy company Gazprom has announced that it has “completely suspended gas supplies” to Poland’s PGNiG and Bulgaria’s Bulgargaz citing their failure to pay in roubles. What is the impact?

• The gas restrictions do not put the two countries in immediate jeopardy. Gas deliveries from Russia to Poland and Bulgaria were already set to halt later this year.
• Poland, which imports 40% of its natural gas from Russia, has been researching alternative sources for some years.
• However, in the short term, it will miss out on the five billion cubic metres of gas it was supposed to acquire from Gazprom.
• It will most likely compensate with supply from Germany. Bulgaria, which imports 77% of its natural gas from Russia, faces a more serious dilemma.

• Poland has served as a significant supply route for military goods to Ukraine. It also confirmed that it will send tanks to Ukraine earlier this week.
• Gazprom had just issued a new set of penalties against the company and other Russian businesses and oligarchs just hours before it acted.
• Bulgaria, however, has severed many of its historic links to Moscow since a new liberal government took office last year.
• It has not only backed Western sanctions on Russia, but it has also welcomed Western combat jets to a new NATO facility on the Black Sea coast.
• It is also a major manufacturer of non-NATO armaments, which it may supply to Kyiv.

• The 27-member European Union has criticised Russia statin that “ Kremlin uses fossil fuels to blackmail and also stated that this is the beginning of the end of era of Russian fossil fuel in Europe.

How Europe is countering?

• Oil (43 percent), natural gas (24 percent), nuclear energy (14 percent), and hydropower (4 percent) make up Europe’s energy mix, with renewables like wind and solar accounting for the rest.
• With climate change a big political issue in Europe, coal which has huge reserves on the continent is no longer an option, and given popular opposition to nuclear power, the EU is left with natural gas as the cleanest energy source.
• So, in the short term, the EU is preparing for the approaching winter’s heating needs by filling up its gas storage facilities to 80-90 percent capacity and replacing piped gas from Norway and North Africa for Russian supplies as much as possible.
• However, these will not be sufficient to eliminate Russian reliance.
• So, the longer-term strategy is centred on importing liquefied natural gas (LNG) from the U.S. and the Middle East.