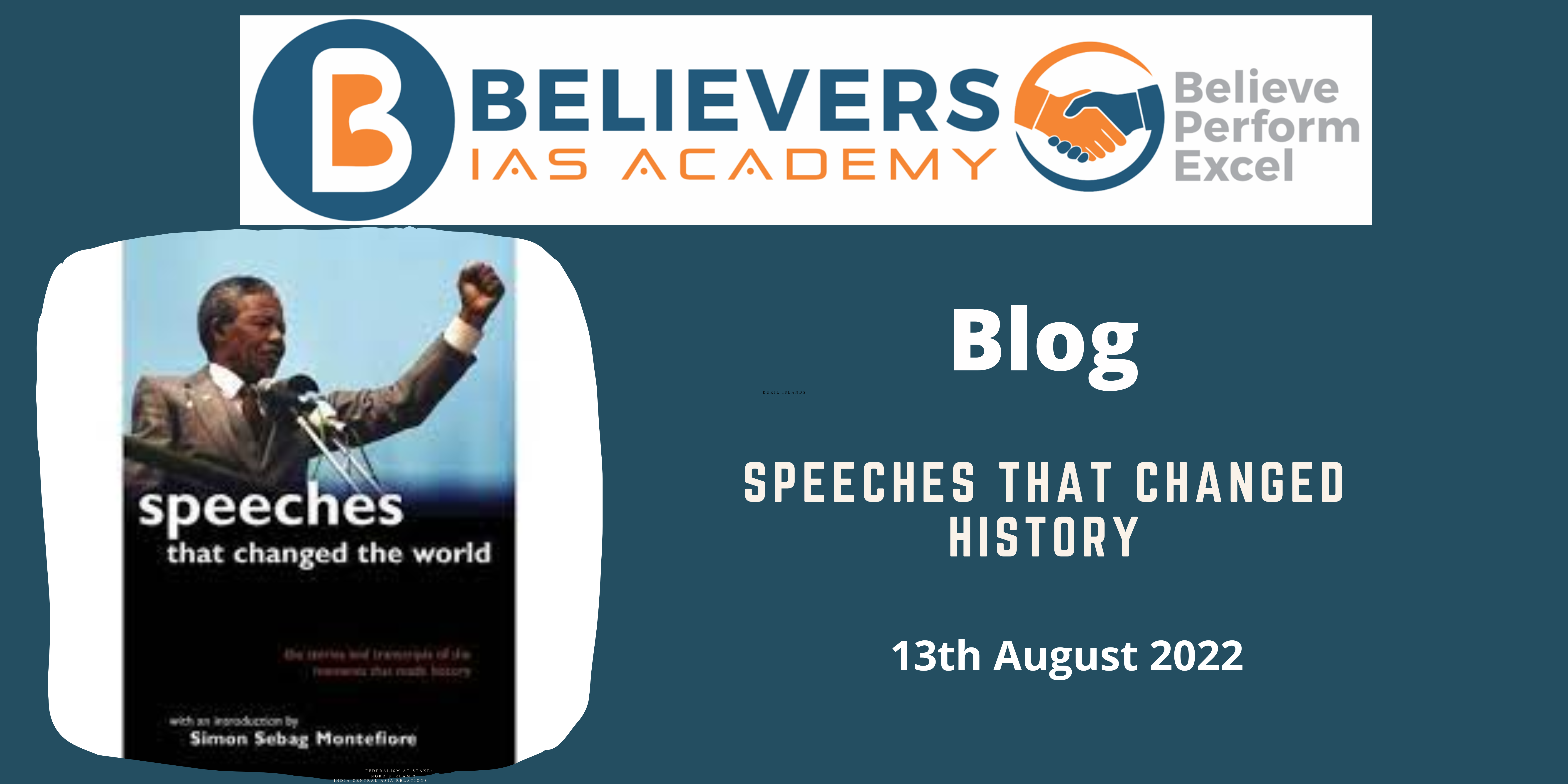 We all have heard the saying that ‘pen is mightier than the sword’, though it may seem rather absurd to think that just words can change history, it has been proven to be true multiple times throughout history. Words when spoken have the power to change minds and hearts of the people, give hope to the hopeless, courage to the cowardly and inspire the uninspired. When Mark Antony who came to ‘bury Caesar, not to praise him’ was able to incite an insurrection against Brutus and Cassius who were ‘honourable men’, it was through naught
but the power of their words. Hence, we need to go through the various speeches that changed history, not to learn the words, but to understand the emotions which triggered them. The knowledge we gain from them may be limited but the insights we get would be beyond compare. Some of the famous speeches from the annals of history:

Let’s go to ancient Greece and check out the ‘Father of Western Philosophy’, Socrates himself. When arrested and put on trial for corrupting the youth, not believing the gods, and creating new deities, he gave the following words;

“Someone will say: Yes, Socrates, but cannot you hold your tongue, and then you may go into a foreign city, and no one will interfere with you? Now I have great difficulty in making you understand my answer to this. For if I tell you that to do as you say would be a disobedience to the God, and therefore that I cannot hold my tongue, you will not believe that I am serious; and if I say again that daily to discourse about virtue, and of those other things about which you hear me examining myself and others, is the greatest good of man, and that the unexamined life is not worth living, you are still less likely to believe me.”

“Give me liberty, or give me death” by Patrick Henry:

From ancient Greece let’s go to North America before US war of Independence. Realising a war with the British was inevitable to achieve self-rule, Patrick Henry one of the founding fathers of United States gave the following speech;

“If we were base enough to desire it, it is now too late to retire from the contest. There is no retreat but in submission and slavery! Our chains are forged! Their clanking may be heard on the plains of Boston! The war is inevitable and let it come! I repeat it, sir, let it come. It is in vain, sir, to extenuate the matter. Gentlemen may cry, Peace, Peace but there is no peace. The war is actually begun! The next gale that sweeps from the north will bring to our ears the clash of resounding arms! Our brethren are already in the field! Why stand we here idle? What is it that gentlemen wish? What would they have? Is life so dear, or peace so sweet, as to be purchased at the price of chains and slavery? Forbid it, Almighty God! I know not what course others may take; but as for me, give me liberty or give me death!”

“The Gettysburg Address” by Abraham Lincoln:

The next excerpt is also from the United States. The 16th President of United States Abraham Lincoln fought a civil war in order to abolish slavery. The speech he gave at Gettysburg cemetery became known the world over and gave the definition for democracy to the
world:

“It is for us the living, rather, to be dedicated here to the unfinished work which they who fought here have thus far so nobly advanced. It is rather for us to be here dedicated to the great task remaining before us—that from these honoured dead we take increased devotion to that cause for which they here gave the last full measure of devotion—that we here highly resolve that these dead shall not have died in vain—that this nation, under God, shall have a new birth of freedom, and that government of the people, by the people, for the people, shall not perish from the earth.”

During the 1930s when the world was reeling under the ‘Great Depression’ and the collapse of western economic systems, Franklin D Roosevelt was elected as the President of United States. On his inaugural address to the house of congress in 1933, he gave a rousing speech to a scared country which helped to rally them to overcome the difficulties and renew their spirit;

“I am certain that my fellow Americans expect that on my induction into the Presidency I will address them with a candour and a decision which the present situation of our Nation impels. This is pre-eminently the time to speak the truth, the whole truth, frankly and boldly. Nor need we shrink from honestly facing conditions in our country today. This great Nation will endure as it has endured, will revive and will prosper. So, first of all, let me assert my firm belief that the only thing we have to fear is fear itself-nameless, unreasoning, unjustified terror which paralyzes needed efforts to convert retreat into advance. In every dark hour of our national life a leadership of frankness and vigour has met with that understanding and support of the people themselves which is essential to victory. I am convinced that you will again give that support to leadership in these critical days.”

By the 1940s Germany’s Blitzkrieg attacks were devastating the allies defence lines and France fell to German hands by 1940. In this scenario Britain elected Winston Churchill as the new prime minister. Mr Churchill, a veteran of the first world war was known for his
aggressive tendencies. In his first speech to the British House of Commons as the new Prime Minister, he gave a fiery speech to arouse the fighting spirit of all the British people;

“I say to the House as I said to ministers who have joined this government, I have nothing to offer but blood, toil, tears, and sweat. We have before us an ordeal of the most grievous kind. We have before us many, many months of struggle and suffering. You ask, what is our policy? I say it is to wage war by land, sea, and air. War with all our might and with all the strength God has given us, and to wage war against a monstrous tyranny never surpassed in the dark and lamentable catalogue of human crime. That is our
policy. You ask, what is our aim? I can answer in one word. It is victory. Victory at all costs – Victory in spite of all terrors – Victory, however long and hard the road may be, for without victory there is no survival.”

By 1942 the second World War had entered its most destructive phase. Indians have been fighting and dying for the British Empire for decades without any recognition for their efforts. The frustration of the nation with the British reached a boiling point after the failure of Cripps Mission which resulted in Gandhiji launching the Quit India Movement;

“I believe that in the history of the world, there has not been a more genuinely democratic struggle for freedom than ours. I read Carlyle’s French Resolution while I was in prison, and Pandit Jawaharlal has told me something about the Russian revolution. But it is my conviction that inasmuch as these struggles were fought with the weapon of violence they failed to realize the democratic ideal. In the democracy which I have envisaged, a democracy established by non-violence, there will be equal freedom for all. Everybody will be his own master. It is to join a struggle for such democracy that I invite you today. Once you realize this you will forget the differences between the Hindus and Muslims, and think of yourselves as Indians only, engaged in the common struggle for independence.”

“Tryst with Destiny” by Jawaharlal Nehru:

After two centuries of colonial rule and half a century of fighting for freedom, India gained independence at the midnight of August 15 th 1947. Pandit Jawaharlal Nehru, who was elected as the first Prime Minister of Independent India addressed the nation from the Red
Fort in Delhi with an iconic speech which spoke about our ‘tryst with destiny’;

“Long years ago, we made a tryst with destiny, and now the time comes when we shall redeem our pledge, not wholly or in full measure, but very substantially. At the stroke of the midnight hour, when the world sleeps, India will awake to life and freedom. A moment comes, which comes but rarely in history, when we step out from the old to new, when an age ends, and when the soul of a nation, long suppressed, finds utterance.”

“I Have a Dream”; by Martin Luther King:

Though slavery in the United States ended in 1863 with the ‘Emancipation Proclamation’, it took another century for the African-Americans to get their civil rights. One of the prominent leaders of the civil rights movement was Martin Luther King. Mr King, a skilled orator often used his words to inspire millions of people and made them fight for their rights. Mr King was a believer in Gandhian philosophies and used non-violence against oppression. His speech during the March on Washington for Jobs and Freedom became well known, the world over and became synonymous with American Civil Rights movement;

“I have a dream that one day down in Alabama, with its vicious racists, with its governor having his lips dripping with the words of interposition and nullification – one day right there in Alabama little black boys and black girls will be able to join hands with little white boys and white girls as sisters and brothers.
I have a dream today.
I have a dream that one day every valley shall be exalted, and every hill and mountain shall be made low, the rough places will be made plain, and the crooked places will be made straight, and the glory of the Lord shall be revealed and all flesh shall see it together. This is our hope. This is the faith that I go back to the South with. With this faith we will be able to hew out of the mountain of despair a stone of hope. With this faith we will be able to transform the jangling discords of our nation into a beautiful symphony of brotherhood. With this  faith we will be able to work together, to pray together, to struggle together, to go to jail together, to stand up for freedom together, knowing that we will be free one day. This will be the day, this will be the day when all of God&#39;s children will be able to sing with
new meaning ;”My country tis of thee, sweet land of liberty, of thee I sing. Land where my fathers died, land of the Pilgrims pride, from every mountainside, let freedom ring!”