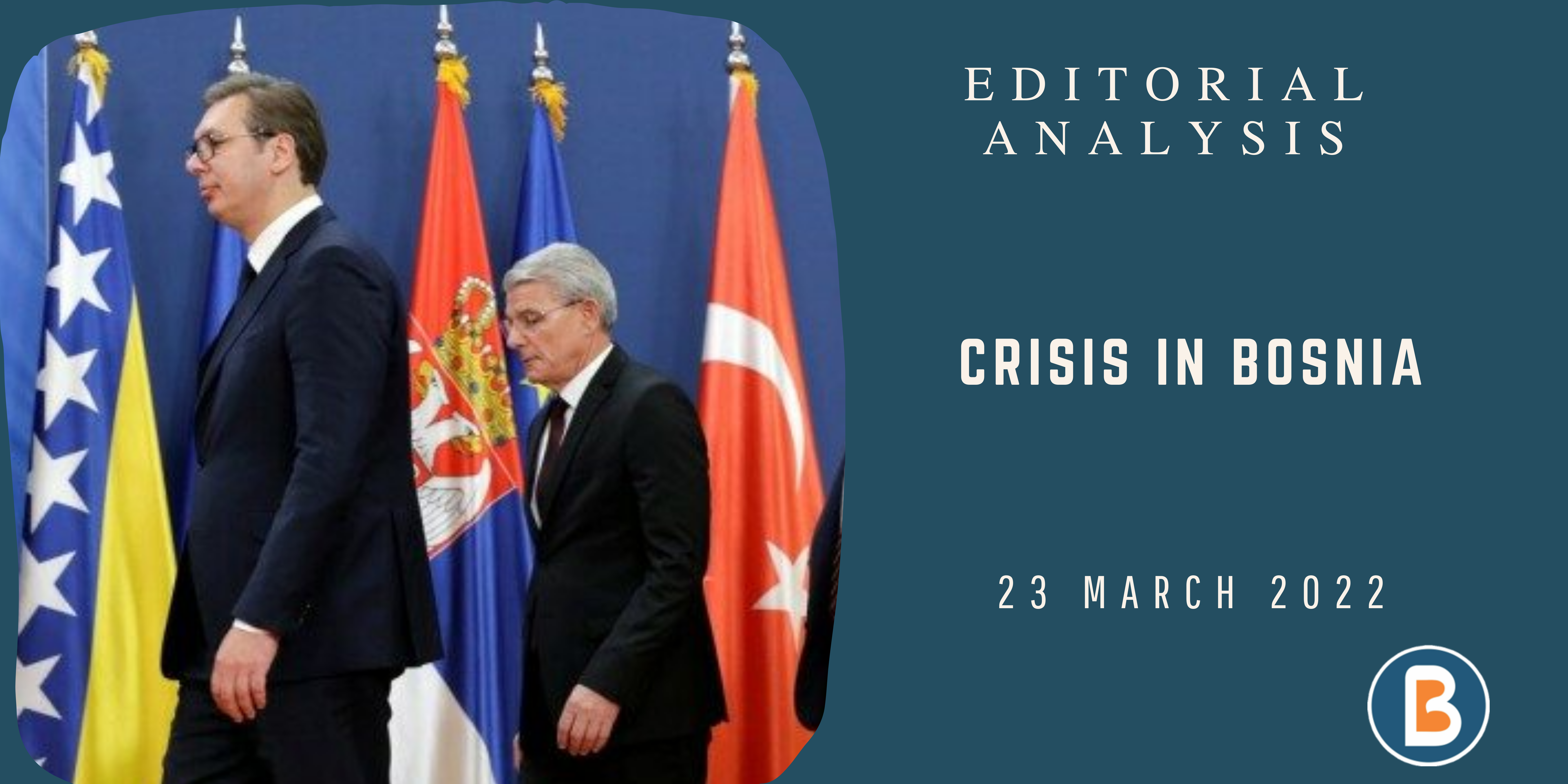 • Bosnia is going through a period of crisis in both of its administrative units.
• On the one hand, it is a clash of interests between the Bosnian Serbs Republic and the rest of the country, while on the other hand, there is the electoral clash between the Bosnian Croats and the Bosniaks.
• Such identity-based clashes could spark the flames of separation, ethnic violence and major conflicts.
• The relevance of the Dayton Agreement meant to connect the three identities also comes into question.

• After the breakup of Yugoslavia in 1991, six republics were carved out from the federation, namely Bosnia and Herzegovina, Croatia, Macedonia, Montenegro, Serbia and Slovenia.
• The collapse of Yugoslavia saw the rise of ethnic nationalism, and the groups began to show aggression towards one another, which led to a war from 1992 till 1995.
• In order to maintain peace and stability in the post-war period, the Dayton Agreement or Dayton Accords was signed in December 1995.
• The crux of the agreement was the division of Bosnia into two administrative units namely, the Federation of Bosnia and Herzegovina (for Bosniaks and Croats) and Republika Srpska (for Bosnian Serbs)

What are the international reactions?

• US has declared that it will impose sanctions on those who violate the Dayton Agreement, US has sanctioned Dodik, accusing him of corruption and threatening to destabilize the region
• EU has, within its capacity, tried to solve the electoral crisis. Bosnia is not a member of the EU but had applied for its membership in 2016 and awaits the opportunity to join it

• Russia is considered a supporter of its Slavic Serbian brethren in the conflict.
• Russia could use this opportunity to further its influence and control in the region.
• This support for Bosnian Serbs by Russia could have regional implications particularly after Russia’s warning of a reaction if Bosnia joins NATO
• Russia and NATO are currently in a state of war in Ukraine.

Revival of the Rivalry

• Though Russia is currently at loggerheads with Ukraine, Bosnia is a different situation.
• Ukraine belongs to Russian immediate neighborhood and any NATO involvement in Ukraine is seen as a direct threat to Russian security, whereas Bosnia is far from the neighborhood and therefore, remains a region of interest.
• Russia’s future plans of expanding its sphere of influence post Ukraine could see Bosnia play an important role, particularly with Serbia, a Russian ally located next to Bosnia.
• There could be a direct clash with NATO whose member Croatia shares a border with Bosnia.
• Thus, any plans of expansion of influence could lead to another front of conflict between bitter old rivals—Russia and the West.

• The crises in Bosnia and Herzegovina have put the nation in a red alert situation and there are high chances of it erupting into a major conflict or civil war.
• If no serious efforts are made to solve the current crisis, there could be political instability, which could in turn fan ideas of disintegration and separation.
• This situation could take Bosnia 26 years back to the civil war era and ethnic conflicts, devastation and loss of life.
• If the situation worsens, it could also lead to a refugee crisis which would further burden Europe, which is already suffering from an ongoing refugee crisis.
• Russia’s involvement in Bosnian domestic politics would spark another front for conflict and have an impact on the European regional security paradigm.
• The crisis, if it flares up, would also interfere in NATO’s quest for military expansion into the Balkans and Eastern Europe.