Strategic Implications of Melting down of The Arctic 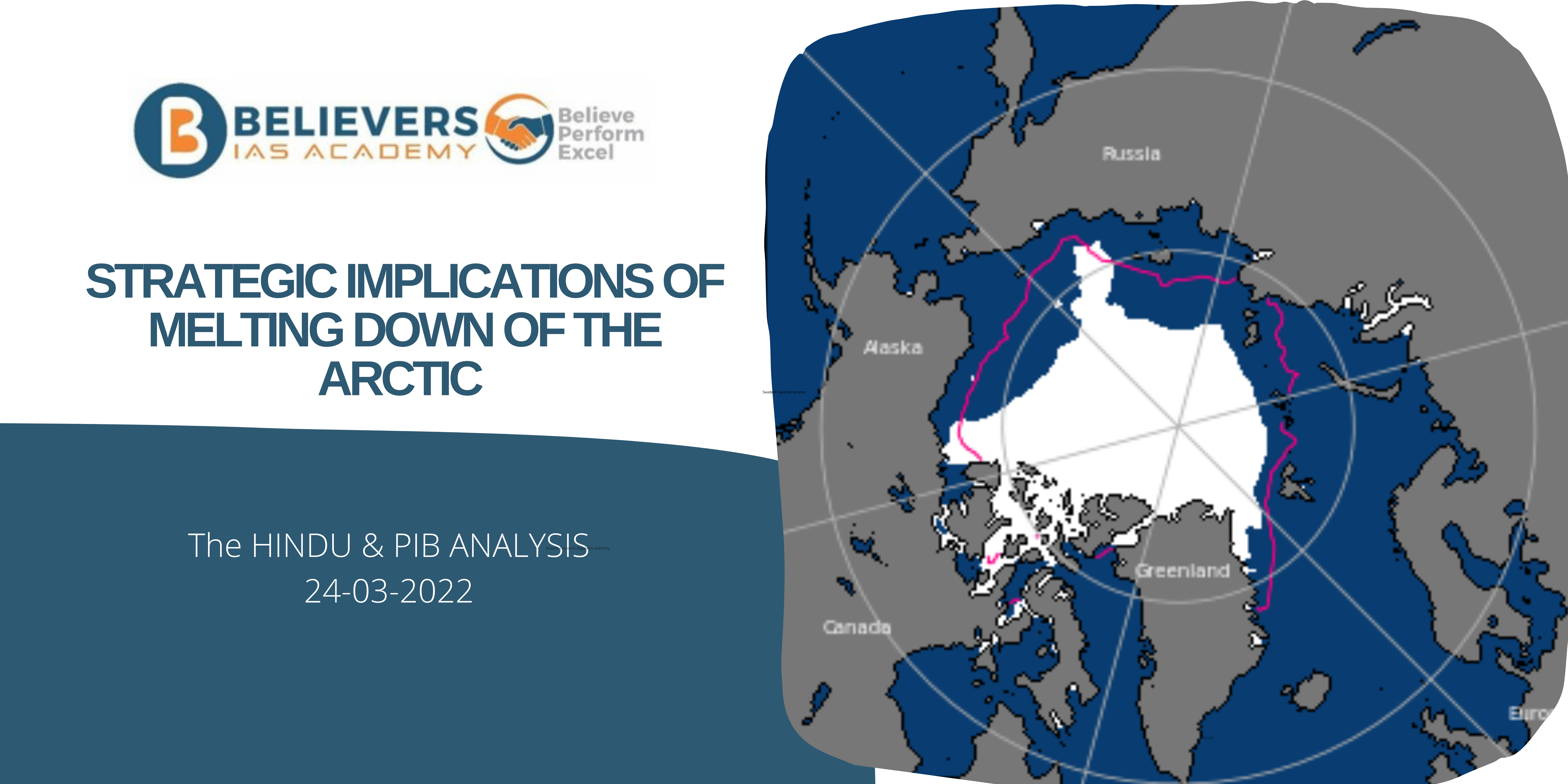 Strategic Implications of Melting down of The Arctic

• Arctic region is the one which is extremely affected by climate change, it is warming three times faster than the rest of the world.
• This will have an impact on the global shipping routes and will encourage exploration of minerals and hydrocarbons.

• At this point of time when the whole world is facing the challenge of climate change, there is a need to refurbish the policies to cope with the changing trends.
The significance of the arctic for India can be classified into following categories:
1. Scientific Research, Climate Change and Environment
2. Economic and Human Resources
3. Geopolitical and Strategic

• The climatic changes which are occurring in the arctic have been impacting the global weather pattern.
• So, this will have an impact on the monsoons, India which is dependent on the monsoons for agriculture needs research into the changing weather patterns.
• Also, India has many islands in both the Bay of Bengal and Arabian sea, the melting of the ice and increasing sea level will have devastating impact on the small islands in the Indian Ocean.
• Though Arctic and Himalayas are distantly located they share similar concerns, the study of meltdown in arctic is helping the scientific community to better understand the changes in the Himalayas.
• Arctic region has rich deposits of coal, gypsum and diamonds and also substantial reserves of zinc, lead, placer gold and quartz, so in future it has huge potential in exploring mineral resources.
• In January 2018, China’s White Paper on Arctic policy called itself a ‘Near-Arctic State’.
• It also referred to trans-Arctic shipping routes as the Polar Silk Road, identifying it as a third transportation corridor for the Belt and Road Initiative (BRI)
• US countered China by declaring that “there are only Arctic States and Non-Arctic States. No third category exists.
• China has made significant investments in the Arctic, primarily in infrastructure and energy sectors, to the tune of US$ 90 billion, between 2012 and 2017, and is the only country apart from Russia, to be constructing nuclear ice-breakers.
• Russia accounts for almost half of the Arctic in terms of area, coastline, population, mineral wealth and hydrocarbons.
• Russia could be said to have the most at stake in the Arctic in absolute terms.
• Facing sanctions, Russia is soliciting funding and collaboration for developing infrastructure in the Arctic and the Northern Sea Route (NSR).
• Russia considers parts of NSR to be internal waters, regulates transit of merchant ships and restricts passage of foreign warships, which is being opposed by the US.