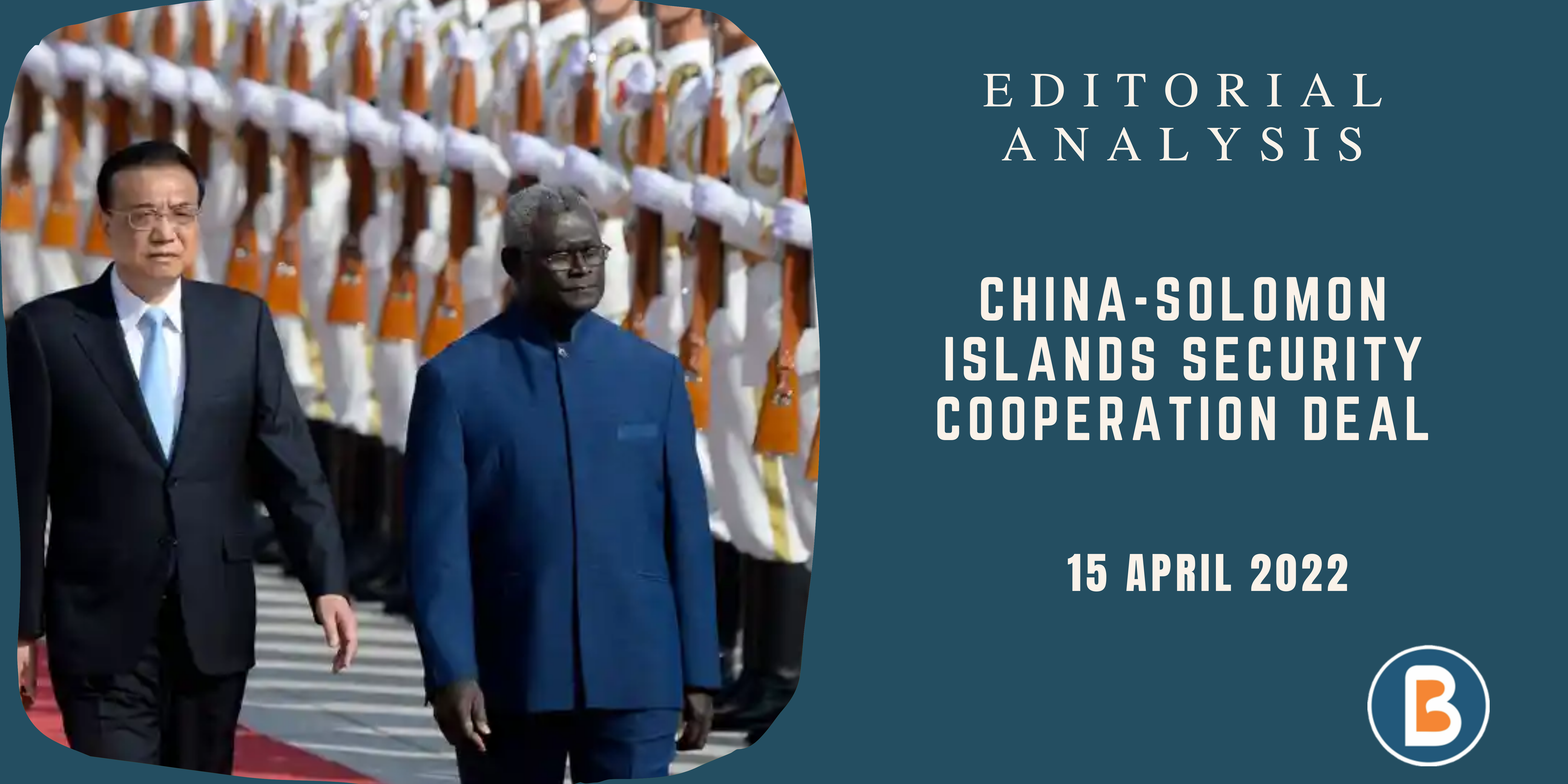 • The social media leak of the draft security co-operation document between China and the Solomon Islands has created huge controversy as it has the potential to disturb the established security mechanisms in the South Pacific region.

• On March 24, a document headed “Framework Agreement between the Governments of the People’s Republic of China and the Governments of the Solomon Islands on Security Cooperation” was leaked on social media.
• It sparked widespread debate both at home and abroad since it has the potential to disrupt established security systems in the South Pacific area.
• The pact expressly authorises Beijing to dispatch “police, armed police, military personnel, and other law enforcement and armed forces” to the islands at the request of the latter government, or if Beijing believes the safety of its projects and personnel on the islands is jeopardised.

• The Solomon Islands is part of the ethnically Melanesian group of islands in the Pacific and lies between Papua New Guinea and Vanuatu.
• The islands, which were initially controlled by the British Empire during the colonial era, went through the hands of Germany and Japan and then back to the U.K., after the Americans took over the islands from the Japanese during World War II.
• The islands became independent in 1978 to become a constitutional monarchy under the British Crown, with a parliamentary system of government.
• Nevertheless, its inability to manage domestic ethnic conflicts led to close security relations with Australia, which is the traditional first responder to any crisis in the South Pacific.
• The Pacific Islands are one of the few places in the world where China faces diplomatic competition from Taiwan.
• China believes Taiwan to be a renegade territory in need of reunification, and it opposes Taiwan’s worldwide recognition as an independent state. As a result, any country that wants to establish official relations with China must terminate diplomatic ties with Taiwan.
• The Solomon Islands was one of six Pacific Island countries with formal bilateral ties with Taiwan.

Changes in the region:

• In the post-World War II scenario, the Pacific islands were solely under the sway of Western countries, namely the United States, the United Kingdom, France, and the regional heavyweights, Australia and New Zealand.
• They all have territorial claims in the area, and the three nuclear powers have utilised it as a testing location for their nuclear weapons.
• The region’s smaller island nations are strongly reliant on them, particularly Australia, which is a resident power.
• Through the continuous displacement of Taiwan and the cultivation of economic and political clout, China is posing a growing threat to the region’s existing power structure.