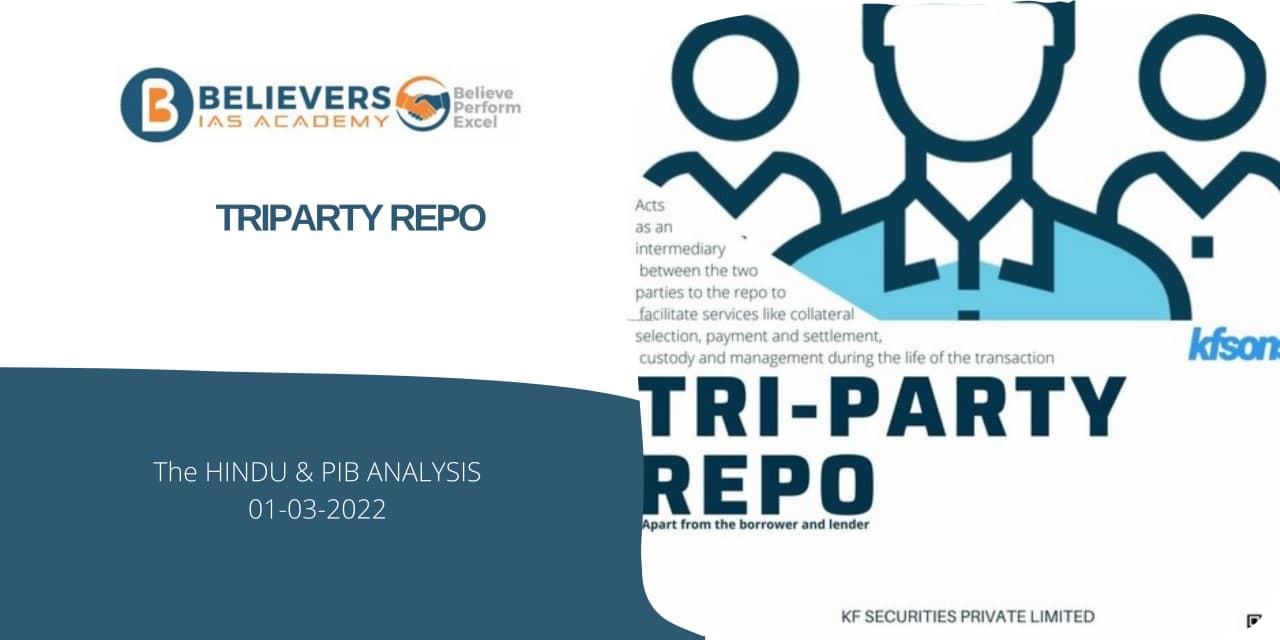 • Tri-Party repo is a financial market instrument where a repo transaction between two parties is administered by a triparty agent which is a licensed financial institution.
• According to the RBI, “Tri-party repo is a type of repo contract where a third entity (apart from the borrower or lender), called a Tri-Party Agent, acts as an intermediary between the two parties to the repo to facilitate services like collateral selection, payment and settlement, custody and management during the life of the transaction.”
• In the case of triparty repo, ‘an investor places its money with a custodian bank, which in turn lends it to another institution, and then assets are pledged as collateral for the loan.’
• The RBI has notified the introduction of triparty repo in India in its April 11, 2017, Draft Directions.
• The triparty repo is a financial market instrument like the market repo and not like the Central Bank repo (RBI’s repo).
• This means that it may not have a monetary policy significance rather will have financial market significance.
The role of the triparty agent
• The differentiating factor in the case of triparty repo, from the market repo is the presence of the third party which is known as triparty agent. In the case of usual market repo, there is not such an entity.
• Job of the triparty agent is to administer the transaction between the lender and the borrower. Here, the agent does some post-trade processing-collateral selection, payment and settlement, custody and management during the life of the transaction. Actually, the tri-party agents are custodian banks who have the license to do the activity at the insistence of the central bank.
• Once a lender or borrower notifies about transactions, the agent matches the transaction amount, conditions and, if successful, processes the transaction. The agent automatically select from the securities account of the seller, sufficient collateral that satisfies the credit and liquidity criteria set by the buyer.
• Besides initiating the deal, the tri-party agent continues to manage the transaction by making revaluation of the collateral, margining, making income payments on the collateral etc.
• The triparty agent doesn’t change the relationship between the parties, and he does not participate in the risk of transactions. In case of default by one party, the impact still falls entirely on the other party. This means that the level of involvement of the agent is less.